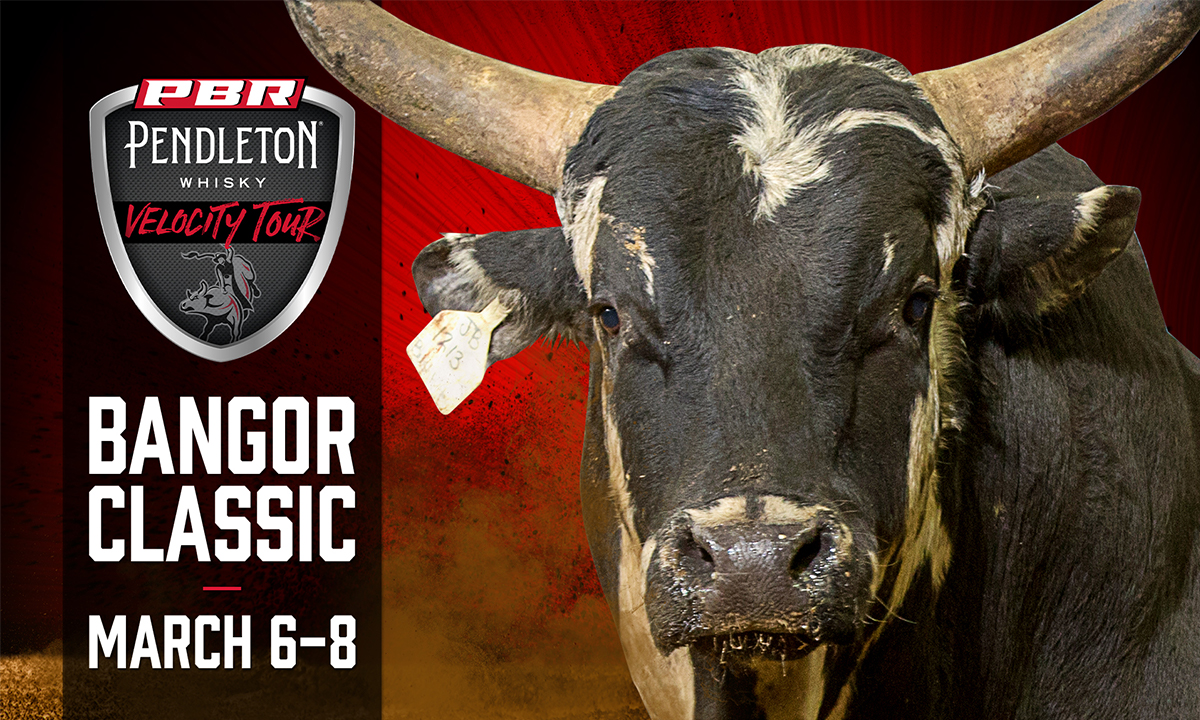 For the 5th year in a row, the PBR’s (Professional Bull Riders) Pendleton Whisky Velocity Tour (PWVT) is bucking into Maine, one of the tour’s most popular stops, for a three-night event March 6-8, 2020.

BANGOR, Maine – For the 5th year in a row, the PBR’s (Professional Bull Riders) Pendleton Whisky Velocity Tour (PWVT) is bucking into Maine, one of the tour’s most popular stops, for a three-night event March 6-8, 2020.

Returning to a sold-out market from 2019, the most intense bull riding action on Earth takes over Bangor for one of the two three-night PWVT events on the 2020 schedule. Bucking in the shadow of Paul Bunyan, last season Australian Lawson Nobbs took home his first-ever PWVT win in come-from-behind fashion. A perfect 4-for-4 performance including his first career 90-point ride propelled the Aussie to the top of the podium. The cowboy from down under took home $7,950 and 170 world points after the event, which surged him to No. 44 in the world rankings. PBR Global Cup competitor Colten Jesse has also earned the title of Bangor Classic champion after winning the 2018 event.

New to the PWVT, select markets in 2020, including Bangor, now offer PBR Premium Experiences – offering an enhanced PBR experience through a behind-the-chutes look into the toughest sport on dirt. Premium options include: early entry, tickets to a premium seating section, hospitality, a pre-event backstage tour by a PBR host that features a PBR 101 presentation and visit with the sport’s fiercest bovine athletes, and the opportunity for autographs and photos from the sport’s top stars.

The PWVT is the fastest-growing tour on the PBR circuit, with attendance up +135% over the last five years. The 2020 PBR PWVT season consists of more than 30 stops, bringing the toughest sport on dirt to cities such as Lexington, Ky.; Jacksonville, Fla.; Wichita, Kan., and Portland, Maine. The culmination of the 2020 season will be the PWVT Finals in Las Vegas, October 30 – November 1. While in the Entertainment Capital of the World the 2020 PWVT champion will hoist the cherished gold buckle, and get an automatic bid to the 2020 PBR World Finals. Former PWVT champions include some of the top riders in the world today, such as Chase Outlaw (2016) and most recent champion Alisson De Souza (2018).

ABOUT THE PENDLETON WHISKY VELOCITY TOUR

The PBR’s Pendleton Whisky Velocity Tour (PWVT) began in 2014 as the premier expansion tour for the PBR. The PWVT, the sport’s fastest-growing tour, brings the excitement and top-levels of cowboy and bovine talent that fans have come to expect from the sport’s leader to cities across the U.S. The tour, which is fully produced and operated by PBR, will visit 31 cities in the 2019 season. The PWVT is proudly supported by Pendleton Whisky, Lucas Oil, Tickets for Less, the United States Border Patrol, Double H Boots, Boot Barn, Pneu-Dart and the South Point Hotel and Casino. Beginning in 2019, the Velocity Tour is being broadcast on RIDE TV’s hit series – “PBR Ride to Glory,” airing prime time every Tuesday night.

PBR is the world’s premier bull riding organization. More than 700 bull riders compete in more than 200 events annually across the televised PBR Unleash The Beast tour (UTB), which features the top 35 bull riders in the world; the PBR Pendleton Whisky Velocity Tour (PWVT); the PBR Touring Pro Division (TPD); and the PBR’s international circuits in Australia, Brazil, Canada and Mexico. PBR’s digital assets include RidePass, which is home to Western sports. PBR is a subsidiary of Endeavor, a global entertainment, sports and content company. For more information, visit PBR.com, or follow on Facebook at Facebook.com/PBR, Twitter at Twitter.com/PBR, and YouTube at YouTube.com/PBR.

Any cookies that may not be particularly necessary for the website to function and is used specifically to collect user personal data via analytics, ads, other embedded contents are termed as non-necessary cookies. It is mandatory to procure user consent prior to running these cookies on your website.