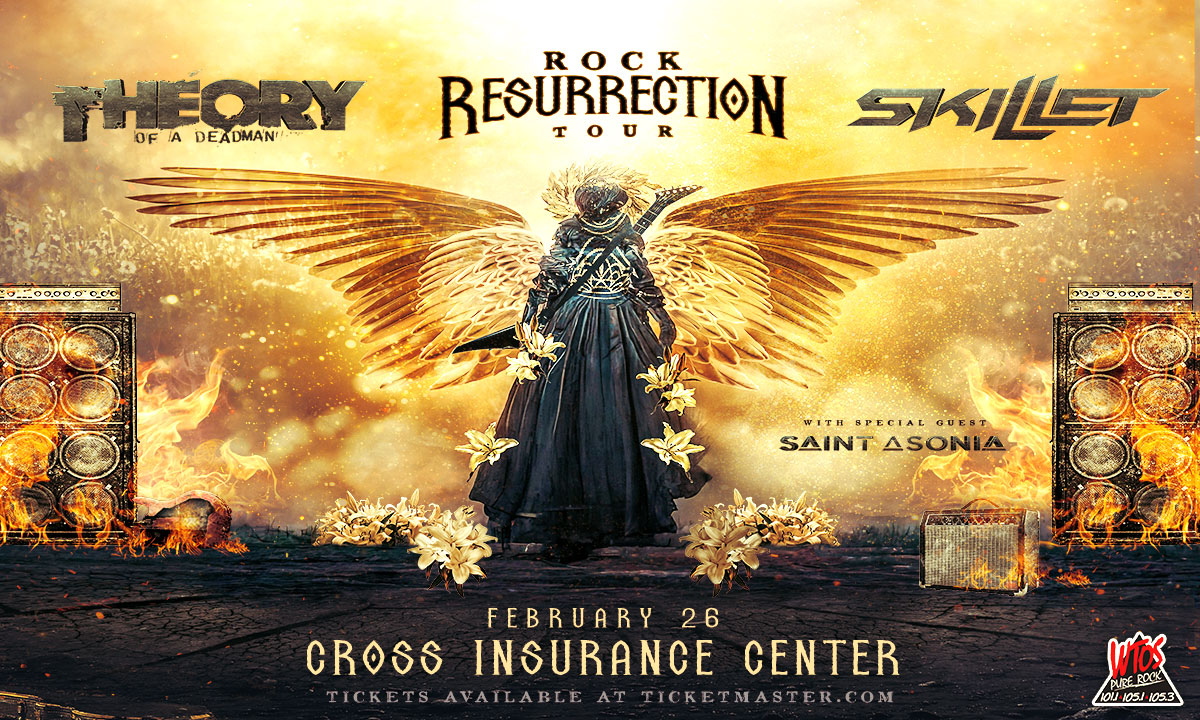 Rock comes ALIVE on the Rock Resurrection Tour, presented by WTOS! Theory of a Deadman and Skillet (with special guest Saint Asonia) stop at the Cross Insurance Center on February 26th, 2023! Get ready to rock out! 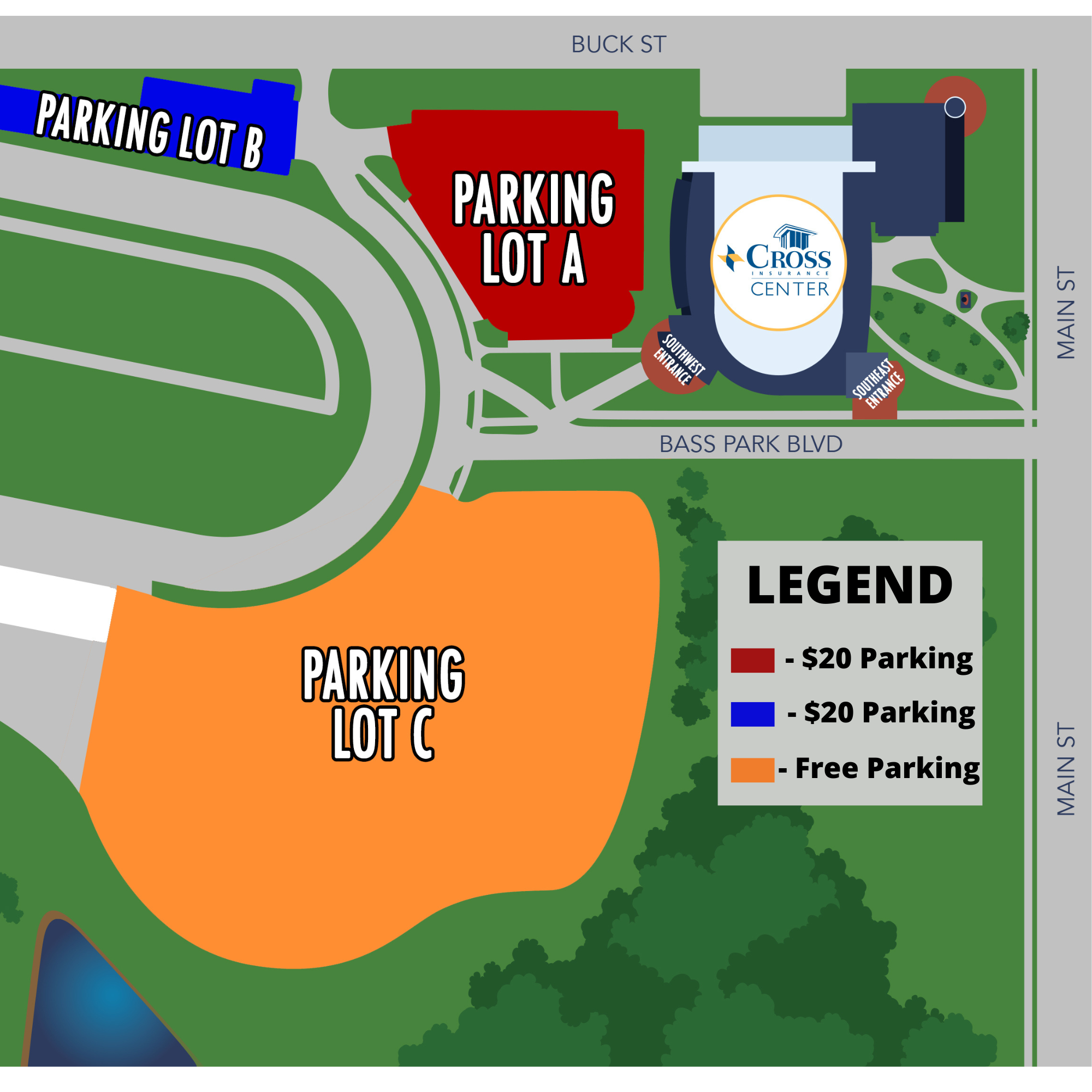 THEORY OF A DEADMAN VIP PACKAGES


*Details of the VIP Experience will be emailed to buyers about 3-5 days before the show.

For questions regarding the VIP packages, please reach out to info@future-beat.com. VIP merchandise will be distributed at the show.

For questions regarding the VIP packages, please reach out to info@future-beat.com.  VIP merchandise will be distributed at the show.

ABOUT THEORY OF A DEADMAN
With sky-high hooks, riffs as thick as a 2×4, rumbling grooves, and a razor-sharp sense of humor, Theory Of A Deadman have quietly persisted as an unapologetic, unbreakable, and undeniable hard rock force with major multiplatinum hits and countless sold out shows in each of the past two decades. Jamming together in basements throughout high school, the band burst out of their small hometown of North Delta, British Columbia with the self-titled, Theory of a Deadman, during 2002. In addition to the double-platinum breakthrough album Scars & Souvenirs [2008] and gold-certified The Truth Is…[2011], they have notched a procession of hits, including the gold-certified “All Or Nothing,” “Bitch Came Back,” and “Lowlife,” platinum-certified “Angel,” “Hate My Life”, and “Not Meant To Be,” double-platinum “Bad Girlfriend,” and triple-platinum “RX (Medicate).” As the biggest smash of their career this far, the latter marked their third #1 on the Billboard Hot Mainstream Rock Tracks Chart and garnered a nomination for “Rock Song of the Year” at the iHeartRadio Music Awards. They have logged two Top 10 debuts on the Billboard Top 200. In 2020, Say Nothing landed at #2 on the Billboard Alternative Albums Chart and #3 on the Rock Albums Chart. Plus, it earned praise from American Songwriter, Billboard, and Classic Rock Magazine who awarded it “4-out-of-5stars.” Now, the award-winning quartet—Tyler Connolly [lead vocals, guitar], Dave Brenner [guitar, backing vocals], Dean Back [bass], and Joey Dandeneau [drums, backing vocals]—once again deliver a barrage of anthems, beginning with the single “Dinosaur” and more to come.
ABOUT SKILLET

Not every rebellion gestates in darkness. As one of the best-selling rock bands of the 21st century, Skillet continues to rebel against conventions, doubts, expectations, and rules with the intent to uplift in light. The two-time GRAMMY® Award-nominated Pandora Billionaires Club members and multiplatinum Kenosha, Wisconsin quartet—John Cooper [lead vocals/bass], Korey Cooper [guitar/keys], Jen Ledger [drums/vocals], and Seth Morrison [lead guitar]—never compromise their integrity. Instead, they’ve traveled their own path to unprecedented heights with an urgent sound, undeniable energy, and unbreakable spirit.

On their eleventh full-length album, Dominion [Atlantic Records], Skillet encourage a different kind of revolt when the world could really use it…

“I call it positive rebellion,” exclaims John. “It’s a rebellion against those internal elements such as fear and anxiety. “It’s a rebellion against external forces wanting you to be something you don’t want to be. It’s a celebration of the freedom we have in our lives. It’s very anti-establishment. It’s a rally call to stand up for what you believe in and not be silenced. It might be unpopular in certain places, but there’s nothing more rock ‘n’ roll than that,” he smiles.

Skillet have embodied rock ‘n’ roll’s evolution from day one. Selling 12 million albums worldwide to date, they’ve earned over a dozen RIAA certifications in recognition of gold, platinum, or multiplatinum status. Landmark album Awake notably went 3x-platinum and picked up a Billboard Music Award. Plus, it housed the 2x-platinum track “Awake & Alive,” 3x-platinumtrack “Hero,” and 4x-platinum track “Monster.” The latter stands out as “one of the most-streamed rock songs in history” with over 1.2BILLION global audio streams. 2019’s Victorious marked the group’s fourth consecutive Top 20 debut on the Billboard Top 200. The album concluded the year on LoudWire’s “The 50 Best Rock Albums of 2019”and yielded the Top 10 rock radio smash “Legendary,” racking up north of 100 million streams. The band’s music also resounds throughout culture, landing syncs from WWE, Marvel, ESPN, MLB, NHL and NFL. As a touring phenomenon, they regularly sell out arenas worldwide, playing in over 26 countries and 6 continents, and have earned acclaim from Billboard, USA Today, The New York Times, and many more. Not to mention, their debut graphic novel, EDEN: A Skillet Graphic Nove lwith Z2 Comics, emerged as the publisher’s best-selling book of all-time and launched a fan favorite series, with their second graphic novel releasing the fall of 2020, EDEN: The Aftermath.