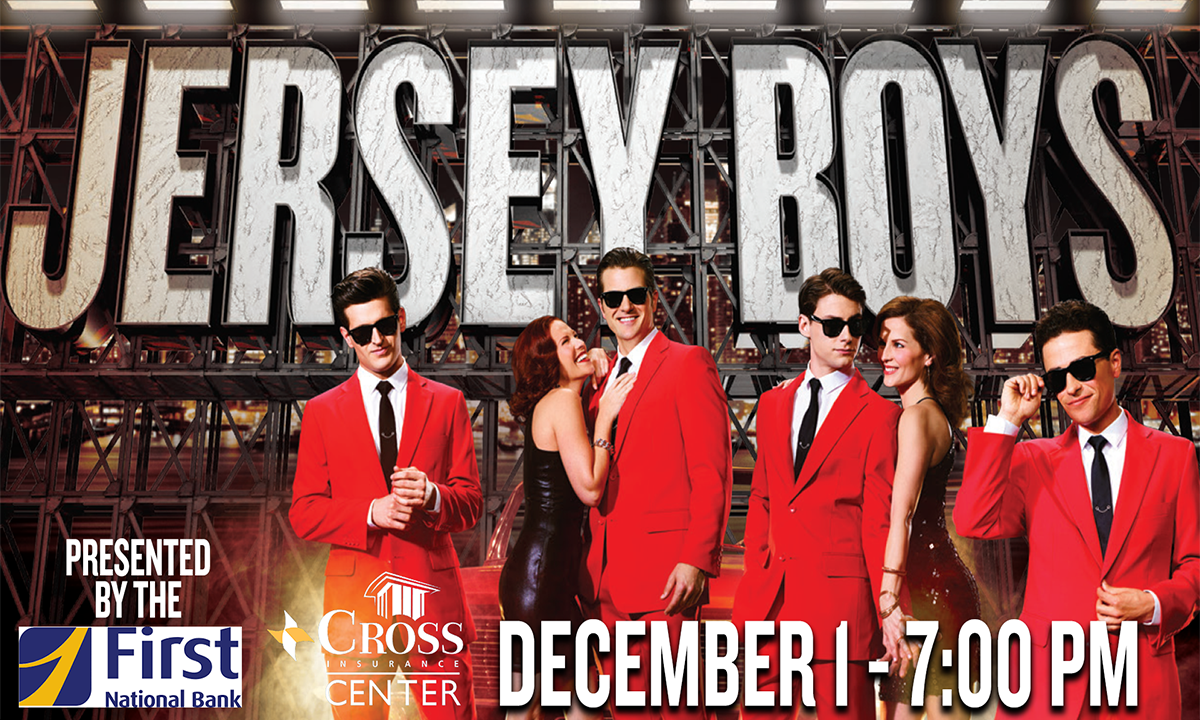 THE BOYS ARE BACK!

Dates have been announced for the Bangor return engagement of the Tony, Grammy and Olivier Award-winning hit musical JERSEY BOYS, the story of Frankie Valli and The Four Seasons. The musical will make its much-anticipated return to Bangor to play the Cross Insurance Center on Sunday, December 1st

Tickets are on sale now!

Dinner Package
Join us for Dinner before the show! 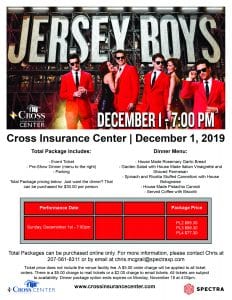 *Additional fees applicable depending on point of ticket purchase

BANGOR, ME, September 16 — Dates have been announced for the Bangor return engagement of the Tony, Grammy and Olivier Award-winning hit musical JERSEY BOYS, the story of Frankie Valli and The Four Seasons. The musical will make its much-anticipated return to Bangor to play the Cross Insurance Center on Sunday, December 1st

“First National Bank is pleased to continue our relationship with the Cross Center by sponsoring Broadway caliber performances here in Bangor.  Not only are they great entertainment but also provide a positive economic impact to the community. “ said Tony Kim, President and CEO of First National Bank.

Catch a sneak peek of Jersey Boys! Log on to www.JerseyBoysTour.com/watch.

JERSEY BOYS is the behind-the-music story of Frankie Valli and The Four Seasons.  They were just four guys from Jersey, until they sang their very first note. They had a sound nobody had ever heard… and the radio just couldn’t get enough of. But while their harmonies were perfect on stage, off stage it was a very different story – a story that has made them an international sensation all over again. The show features all their hits including “Sherry,” “Big Girls Don’t Cry,” “Oh What A Night,” “Walk Like A Man,” “Can’t Take My Eyes Off You” and “Working My Way Back To You.”

JERSEY BOYS opened in New York on November 6, 2005 and by the time it closed over 11 years later on January 15, 2017, it was the 12th longest running show in Broadway history, passing such original Broadway productions as 42nd Street, Grease, Fiddler on the Roof, and The Producers. JERSEY BOYS will return to New York with a new production in November 2017.  The JERSEY BOYS US National Tour opened to rave reviews in San Francisco on December 1, 2006 and is still breaking house records in cities across North America. JERSEY BOYS can also be seen on board the Norwegian Bliss.

JERSEY BOYS will play in Bangor at the Cross Insurance Center on Sunday, December 1st. The performance date is for 7:00 p.m.

Tickets for JERSEY BOYS begin at $37 and are available at www.CrossInsuranceCenter.com, by calling 207.561.8333, or by visiting the Trusted Choice Box Office located at the Southeast entrance in the Cross Insurance Center. Performance schedule, prices and cast are subject to change without notice. For more information, please visit www.JerseyBoysTour.com or www.CrossInsuranceCenter.com.

For more information on JERSEY BOYS, go to www.JerseyBoysTour.com.