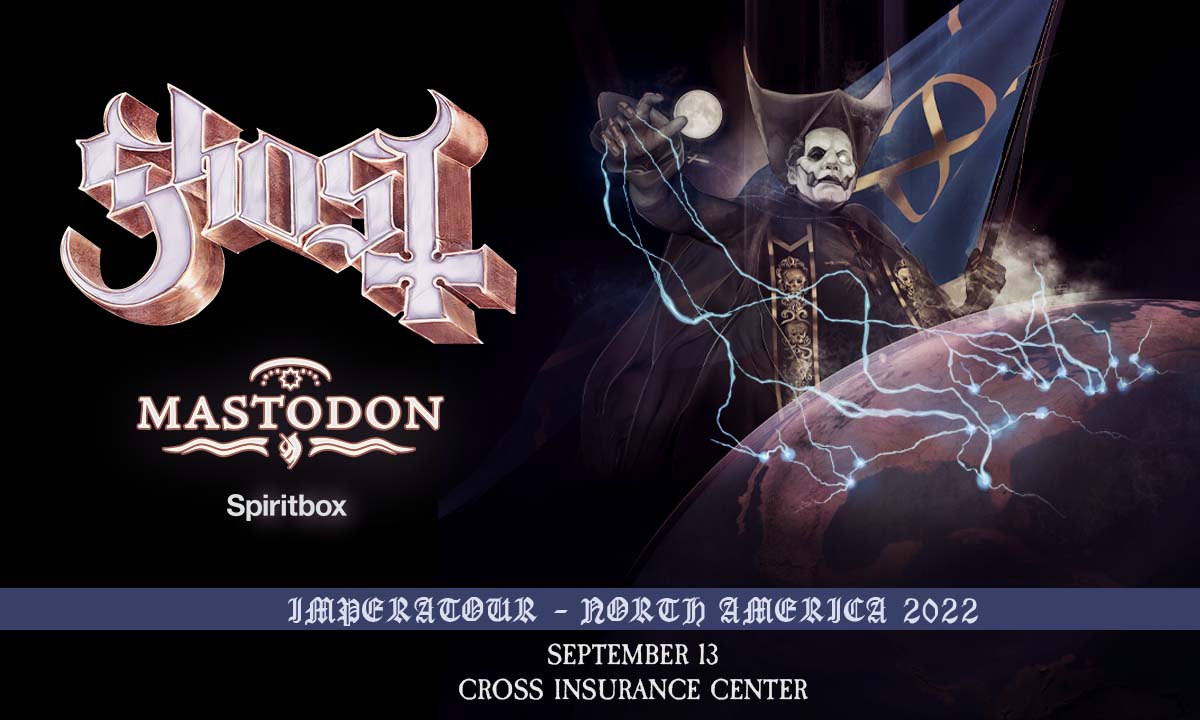 Accumulating well over a billion streams, the GRAMMY-winning Swedish theatrical rock band, GHOST, continues to bring the “euphoric spectacle”(ROLLING STONE) of its live shows to ever-growing and increasingly impassioned crowds. Ghost will continue to elevate and reaffirm its status as one of the world’s most esteemed and celebrated creative forces at the Cross Insurance Center in Bangor, Maine on September 13, 2022.

GHOST will be joined by special guest Mastodon and opener Spiritbox.

All in all, the most current and topical Ghost subject matter to date is set against a hypnotic and darkly colorful melodic backdrop making their new album, IMPERA, a listen like no other—yet unmistakably, quintessentially Ghost. 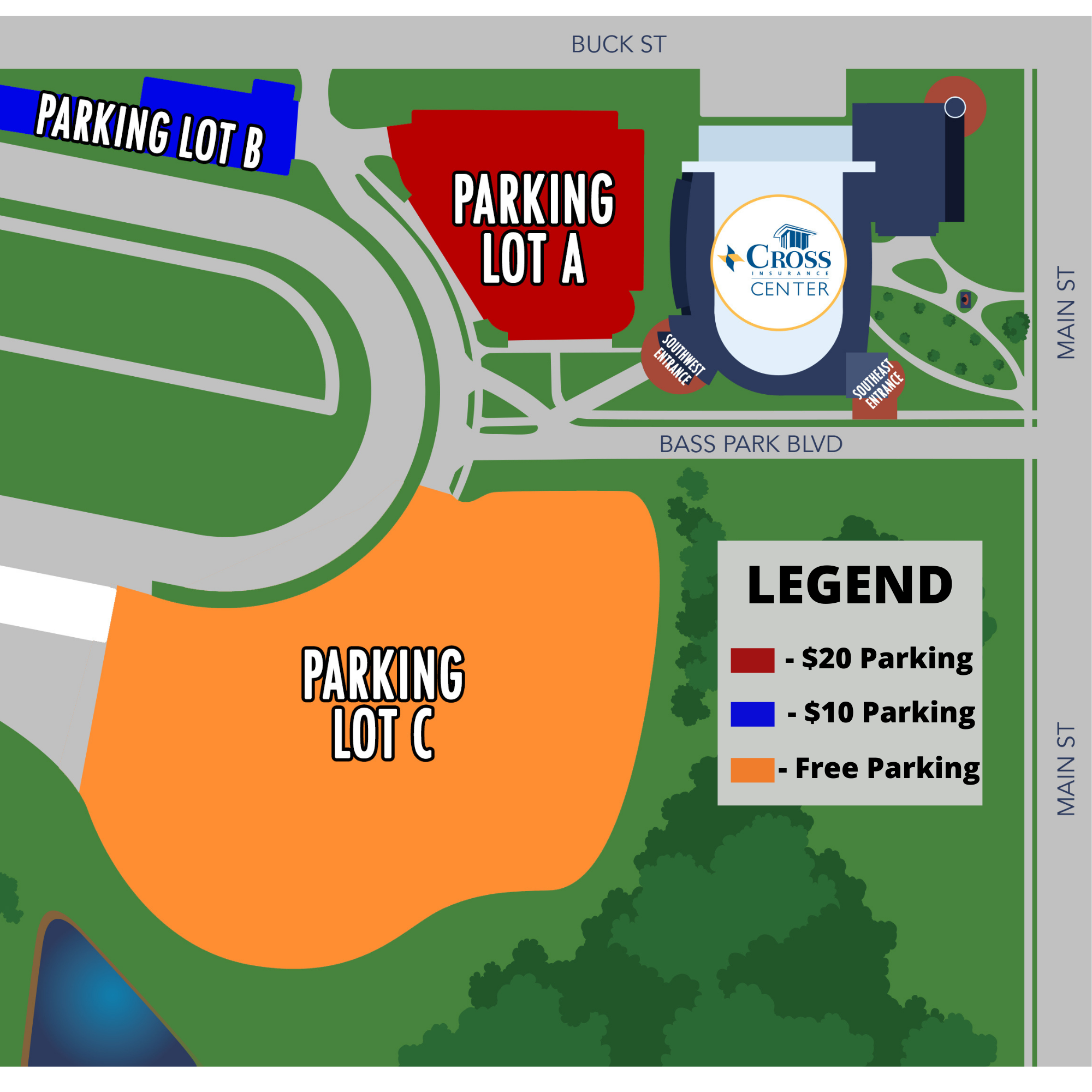 *Additional fees applicable depending on point of ticket purchase.
** GA Floor is standing room ONLY

ABOUT THE ARTIST
Children of North America, rejoice… GHOST will once again bring the “euphoric spectacle” (ROLLING STONE) of its live ritual to North America for the next leg of its globally dominating IMPERATOUR. The North American IMPERATOUR will see the GRAMMY® Award-winning Swedish theatrical rock band headlining 19 arenas across the U.S. and Canada (plus an appearance at Virginia’s Blue Ridge Rock Fest), kicking off August 26 at San Diego’s Pechanga Arena and running through September 23 at the Resch Center in Green Bay.
The newly announced dates will comprise Ghost’s first North American run since the March 11, 2022 release of its fifth album IMPERA via Loma Vista Recordings. As reported by THE LOS ANGELES TIMES in a Calendar cover story, Ghost “conquered metal and the charts” as IMPERA debuted at #1 in a sweep of the U.S. album charts, entering the BILLBOARD 200 at #2 with first week sales of nearly 70,000. Internationally, IMPERA bowed at #1 in the band’s native Sweden as well as Germany and Finland, while cracking the top 5 in the UK (#2), Netherlands (#2),Belgium (#2), Canada (#3), Australia (#3), France (#5), Ireland (#5), and more. Produced by Klas Åhlund and mixed by Andy Wallace—and featuring “Spillways”—hailed as a “sweetly constructed rock tune” by THE NEWYORKTIMES, the Billboard Rock Chart (BDS) #1 charting “Call Me Little Sunshine,” and Active Rock #1 radio single“ Hunter’s Moon”—IMPERA finds Ghost transported centuries forward from the Black Plague era of its previous album, 2018 Best Rock Album GRAMMY® nominee Prequelle—or as ROLLING STONE put it, “Ghost predicted the pandemic, Now the metal band is foretelling the fall of empires.” The result is the most ambitious and lyrically incisive entry in the Ghost canon: Over the course of IMPERA’s 12-song cycle, empires rise and fall, would-be messiahs ply their hype (financial and spiritual alike), prophecies are foretold as the skies fill with celestial bodies divine and man-made… All in all, the most current and topical Ghost subject matter to date is set against a hypnotic and darkly colorful melodic backdrop making IMPERA a listen like no other—yet unmistakably, quintessentially Ghost.
The announcement of IMPERATOUR’s North American swing completes a perfect storm of Ghost mania, coinciding with this week’s ascension of “Call Me Little Sunshine” to the top of the Rock Radio chart and the unveiling of Chapter 11: Family Dinner, the newest installment of Ghost’s long-running narrative series of webisodes. In this next chapter, we find Papa Emeritus IV, having returned to the Ministry, joining Sister Imperator, Mr. Saltarian, and the spirit of Papa Nihil for a meal of Chinese takeout.
Support on all dates (with the exception of Green Bay which will feature support from Carcass, and the Blue Ridge Rock Fest) will come from GRAMMY® Award-winning band Mastodon, who have quietly evolved into one of the most influential, inimitable, and iconic rock bands of the modern era. Since emerging in 2000, the Atlanta quartet have defied both sonic and thematic boundaries with an uncategorizable, undeniable, and uncompromising vision unlike anything else in music. This vision manifested over the course of canonical albums such as Leviathan, which landed on Rolling Stone’s coveted The 100 Greatest Metal Albums of All Time. Following the seminal Crack The Skye [named one of the best albums of 2009 by Time], they earned three consecutive Top 10 debuts on the Billboard Top 200 with The Hunter[2011], Once More ‘Round the Sun [2014], and Emperor of Sand [2017]. Out of six career nominations, they received a GRAMMY® Award in the category of “Best Metal Performance” for “Sultan’s Curse.” They are the rare creative force whose music can be felt everywhere from Game of Thrones, Adult Swim, The History Channel, and DC comics films to Coachella and Bonnaroo. They notably supported the Hirschberg Foundation For Pancreatic Cancer Research with a rendition of “Stairway To Heaven” in honor of late manager Nick John. The group reached another critical high watermark via their ninth full-length, Hushed and Grim. Featuring the GRAMMY® Award-nominated “Pushing The Tides,” it marked the band’s third straight #1 bow on the Billboard Hard Rock Albums Chart. It concluded 2021 on over a dozen year-end lists with Rolling Stone raving, “we get everything from some of the band’s hookiest rockers to date to some of their most awe-inspiring epics.” Evolving as they usher rock into new realms, they forever remain the same unpredictable trailblazing beast—Mastodon
Cross Insurance Center has a new security policy. LEARN MORE
Privacy & Cookies Policy