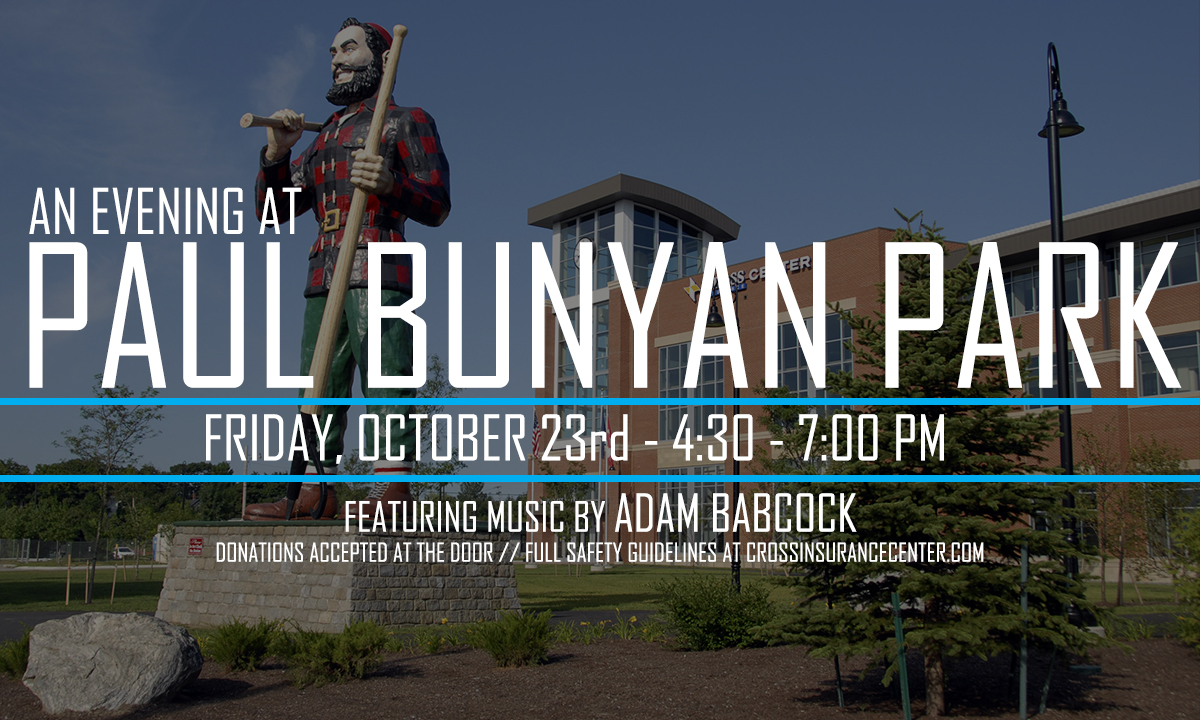 The Cross Insurance Center is proud to present one final edition of the An Evening At Paul Bunyan Park series with the return of Adam Babcock on October 23rd.

As per State of Maine regulations, only 100 people at a time will be allowed into the enclosed outdoor space at a single time. More guests can be let in as other leave, as long as the 100 person limit is not exceeded.

Adam Babcock is a singer-songwriter from Maine who performs both solo as well as full band shows with a roster of highly talented musicians. Adam has become known for his creative lyrics woven into addictive melodies. His debut album ‘Soapboxes’ is a personal diary of love and loss, full of wordplay and soulful messages to engage the listener.

Adam developed a passion for music later in life, and it has been a daily pursuit ever since. Through an incessant writing and performing schedule, he has made music his full time career. His goal is always to be raw with his emotions, honest with his words, and deliver music that holds you in the moment.

BANGOR, ME – One additional “An Evening At Paul Bunyan Park” concert has been announced for October 23rd at the Cross Insurance Center.  The event will be from 5-7:00 p.m., with doors opening at 4:30 p.m., featuring the music of Adam Babcock. This again will be a free event for the Greater Bangor community, located at the Paul Bunyan Park on the Main Street side of the Cross Insurance Center.

“We are so appreciative for the community that has come out and supported us and these events so far.  We’re happy to put on another one before the end of the season with the return of such a great musician in Adam [Babcock],” said Cross Insurance Center General Manager Tony Vail.

This will be the second time that Adam Babcock has played in the series after playing one half of the set in the inaugural show on September 9th with Riff Johnson.  The “An Evening At Paul Bunyan Park” series has continued to grow since the first edition and provided members of the Greater Bangor community a free outdoor event during these challenging times.

Due to State of Maine guidelines, only 100 guests will be allowed into the enclosed area for the event at a single time while the show is ongoing.  Guests attending the event are required to wear masks at all times and abide by all social distancing protocols.  Hand sanitizer will be available for patrons and staff will be sanitizing any equipment, materials, and frequently trafficked areas.  Social distancing circles will also be used as markers for spacing necessary for guests.

Donations will be accepted at the doors.  More information on the event, including complete safety guidelines, can be found at CrossInsuranceCenter.com.